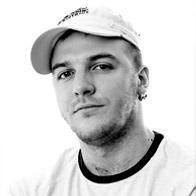 Darko Jecinac, better known as Conte, is a DJ and producer from Novi Sad. Interest in electronic music production appeared in his teen days when he started creating his first beats as an amateur. He soon dedicated himself seriously to music and at 15 started deejaying. Few years later he meets the crew from the Novi Sad radio AS FM, and in 2004 he got a chance to become part of that crew. Through his work and effort, in 2006 he becomes one of the most wanted disk jockeys in Novi Sad – Serbia. Since then, he has left a large number of club performances in many towns across Serbia.